I’ve never carried a child to term. I have, in my medical career, delivered eight (ten too many, I often joke). So, while I don’t know what it’s like to have that life growing increasingly uncomfortably in my lower abdomen, I have some idea what it’s like at the end.

There is a lot of screaming, some crying, assurances that everything will be okay, and an general sense of not being ready for everything that is happening.

Now, I know a book isn’t the same as a baby. I really do. But still, that feeling there at the end? Yeah, I get that. 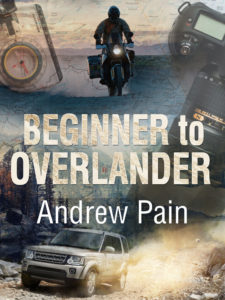 So there is a new book coming out, now in just a few weeks. It’s the result of all the classes I’ve been teaching about Overland travel, trying to get people over the things that keep them from getting on the road. I have heard a lot of reason over the last 5 years, and I’ve done what I can (both in lectures and the book) to address all of them. While the book is still being beat near to death by my editor, it’s now close enough to be available I’ve decided to start taking pre-orders. Since I know pre-orders can be scary I have a double incentive. First, this will be a signed hardcover. I haven’t had a hardcover before, and I’m a little excited about it. Second, it will be less than the final, for sale for reals version of the book. You can only get this from this page, and only during the pre-order. Once it’s out there, the page goes away and you will have to pay the cover price.

So, $25 for a signed hardcover. Almost 300 pages of information. Seems like a no-brainer.